It has been about a week since I cracked open the box of my new, hard to come by, Playstation 4 and started up Assassins Creed IV: Black Flag. It has been an incredible, long and detailed adventure since the first day I started it and I am truly loving the game from the gameplay to the story, to the concept.

What I’d like to talk about today is one of the most fascinating and wonderful details the game has added in my opinion. The music. While sailing the glorious Jackdaw pirate ship around the Bahama’s as pirate Edward Kenway you can often hear and even request your crew singing old time fisherman shanty’s. These shanty’s are largely thought to have been very important on a ship in keeping morale and passing the time. When you consider that sailing from one island to another could take a week or more the men had a lot of time on their hands when not taking care of their duties as crew members.

These songs are fantastic. They add a depth to the game that I think is somewhat overlooked but certainly important. The songs range from happy drunken shanties like All for my Grog belting out “and it’s all for my grog my jolly jolly grog! All my for my beer and tobacca” to the sadder tunes of shanties like Leave Her Johnny where the crew would sing of leaving the ship behind and the grievances, hardships and emotions of sailing a ship. The songs bring something to the game that is irreplaceable as most good music will.

A DLC pack was released on December 18th for Assassins Creed IV: Black Flag entitled Freedoms Cry. In Freedoms Cry you play as Captain Kenway’s quarter-mate, Adéwalé. Born a slave in Trinidad, breaking away and gaining his freedom he found himself on the crew Captain Kenway's Jackdaw, a free man in the country of the Jackdaw as he states. The game, from what I believe, dives into Adéwalé’s past with slavery and the salve trade as a whole and when his life is once again faced with slavery, injustice and brutality. 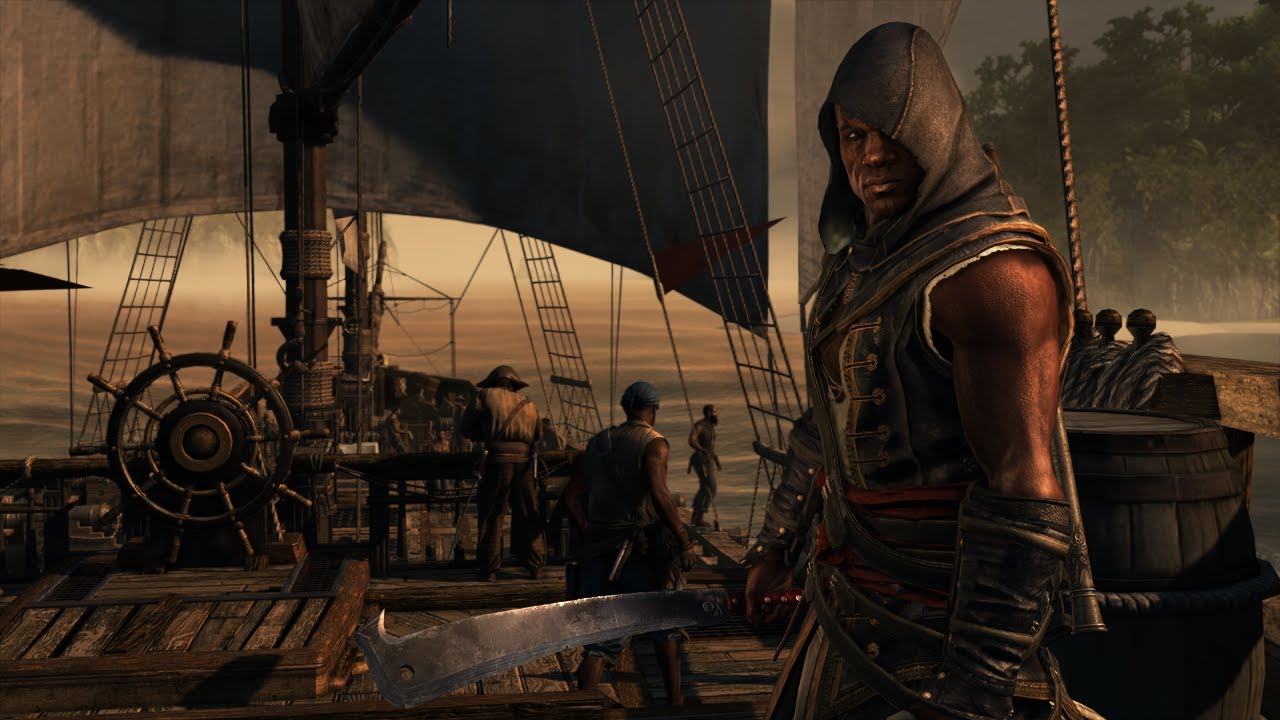 During the “golden age of piracy” in the 1600 and 1700’s It’s no surprise that freed slaves made up the crew on more than a few pirate ships and in a time when Sugar was the biggest cash cow, the plantations were run by slaves.

Freedom cry let's us hear the music that the slaves were singing at that time. Assassin’s Creed goes to great lengths to add as much historical reference as they can and I feel that with this new DLC focusing mainly on slavery, it does not disappoint in historical information on slaves in the 1700’s.

In doing a little research on slavery and music in the 1700’s I found a passage that especially stood out to me.

“The blacks who stepped in chains from the slave ships were a musical people, used to expressing religious ideas in song. Sold into hard work, poverty and oppression in America, they turned to songs for solace, singing on every possible occasion in rhythms that had been long familiar to their race. They sang while picking cotton or shucking corn, sang on the chain gang, sang in prison, sang in church-when allowed to attend.” Found on christianity.com

It’s not surprising this music is hard to find, but I did find a little bit. Here are some of the songs I found relating to 16 and 1700’s in the Bahamas. These songs are powerful and interesting and would create an interesting added depth to the upcoming DLC.

I Told You People Judgement Coming

Out On The Rolling Sea

Numberless As the Sands on the Seashores

My Lord Help Me to Pray

You can hear more on Nonesuch records.com.

As I have yet to play the DLC, still making my way through the main story, I have not heard the exact music in the game but I certainly look forward to it as I feel it will only enhance the experience.

The trailer for DLC has some fantastic music, beautiful imagery and really changes the feel of the game as it is now but doesn't at the same time. I am very much looking forward to adventuring the Bahamas with Adéwalé and I hope to hear the same level of depth through music throughout the entire DLC. You can view the trailer here and if you haven’t played the new Assassin’s Creed I highly recommend it.