I had no idea how I was going to react to ABC's new show, Black~ish~. My skepticism began with the title of the show. "Ish" is often added to a word to mean sort of, or close to. Being a person who has been called Oreo, a poser, a phony (Blerds you feel me?) etc, I really didn't warm up to the idea that I automatically attached to the word, "Blackish."

I must say though, I was somewhat (pleasantly?) surprised at the show. Anthony Anderson does a wonderful job of contextualizing the word "Blackish" when he asked the question, "Do Black people have to shed some of their culture when they ascend the class ladder?" Honestly, my Grandparents would probably say "yes." Ascending the ladder during the times of Jim Crow, it was not easy, and "assimilation" was a matter of survival. But today? I am not so sure. I did like that Anderson pointed out that things that were once inherently Black had been appropriated and no longer were associated with just black people, adding to the idea of the term "Blackish".

Throughout the premiere there were many instances where I felt as though I could relate, and I think, the show walked the graceful line that many other black Americans (no matter how we all differ in our identifiers) could relate to too. I do wish that the show had a family who were all aware of their "blackness," and were equally as frustrated by the ignorance of their peers, but perhaps that is me wanted my own perspective projected on the screen. It would be nice to have a Huxtables-ish (see what I did there?) family that faces challenges of maneuvering around a environment that doesn't fully see or understand them.

But I also agree with the show’s creator, Kenya Burris, that this show reflects many of his and the show’s writers' story:

All of our writers bring their own stories to the table because we feel like that’s how you make them as real and germane to what’s going on today compared to anything else that’s out there. Anthony Anderson and myself and Laurence, we sat down and we said, "These kids are growing up differently than other kids." Definitely different than us, but being little black kids in this experience, no one’s telling their story. And there’s a lot of people who are sort of now seeing that the generational tide is moving enough where a huge of immigrant and minority people have sort of taken some steps into becoming a bigger part of what the Zeitgeist of Americana is.

It is important to show the transition of people too, perhaps to better help the general public process the idea of transition and complete change.

I only have two bones to pick: The treatment of Anderson’s co-star, Tracee Ellis Ross’ character. She plays a mixed-race woman who almost appears to be clueless about race in general, or, race is not something she feels attachment to. This sounds beautiful (although I believe race is something to be celebrated, but it is tricky when there a connotations attached to the word), however, I do think it is possible for a person to be of two different backgrounds and cherish them equally by at least acknowledging those identities (she does briefly when talking about her hair and her butt, but that's it).

Finally, aesthetically speaking, I think it sends an interesting message to viewers when looking at the hue of the family’s skin. This seems like an minor thing, and yes, it does make sense based on the cast, but I cannot help but worry about the black hues we regularly don’t see on TV in successful, positive positions (regarding the invisibility of people who are darker in skin tone).

Overall, the show is relatable, funny, and has people discussing race in a very different way given recent events. I can't wait to see how it evolves. 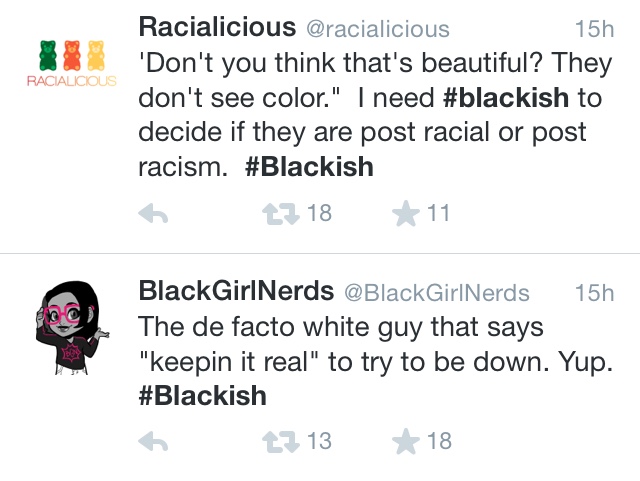 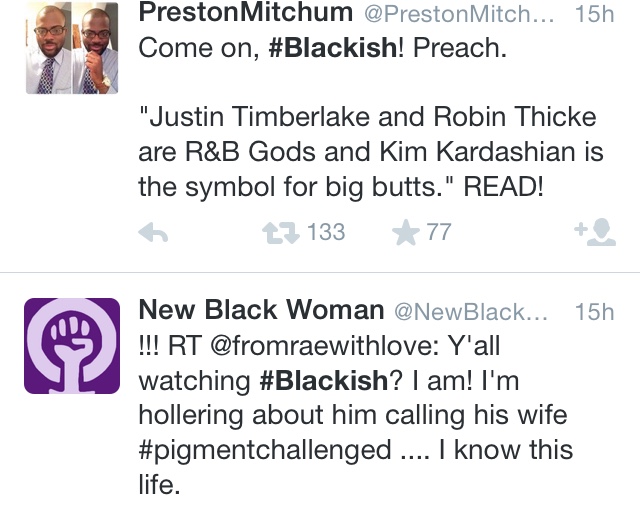 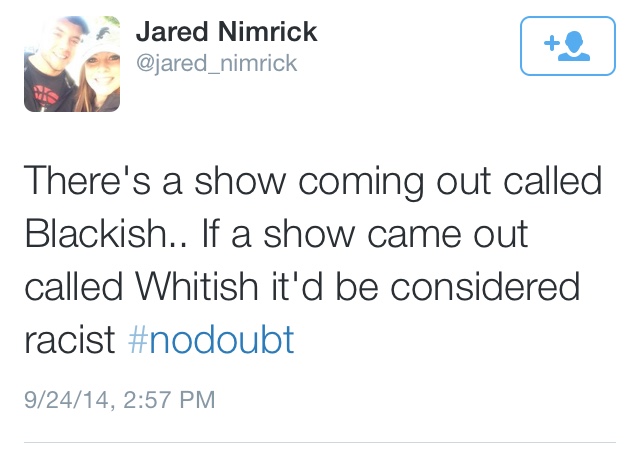 What are your thoughts?

Tune in for Blackish-Wednesdays at 9:30pm EST.